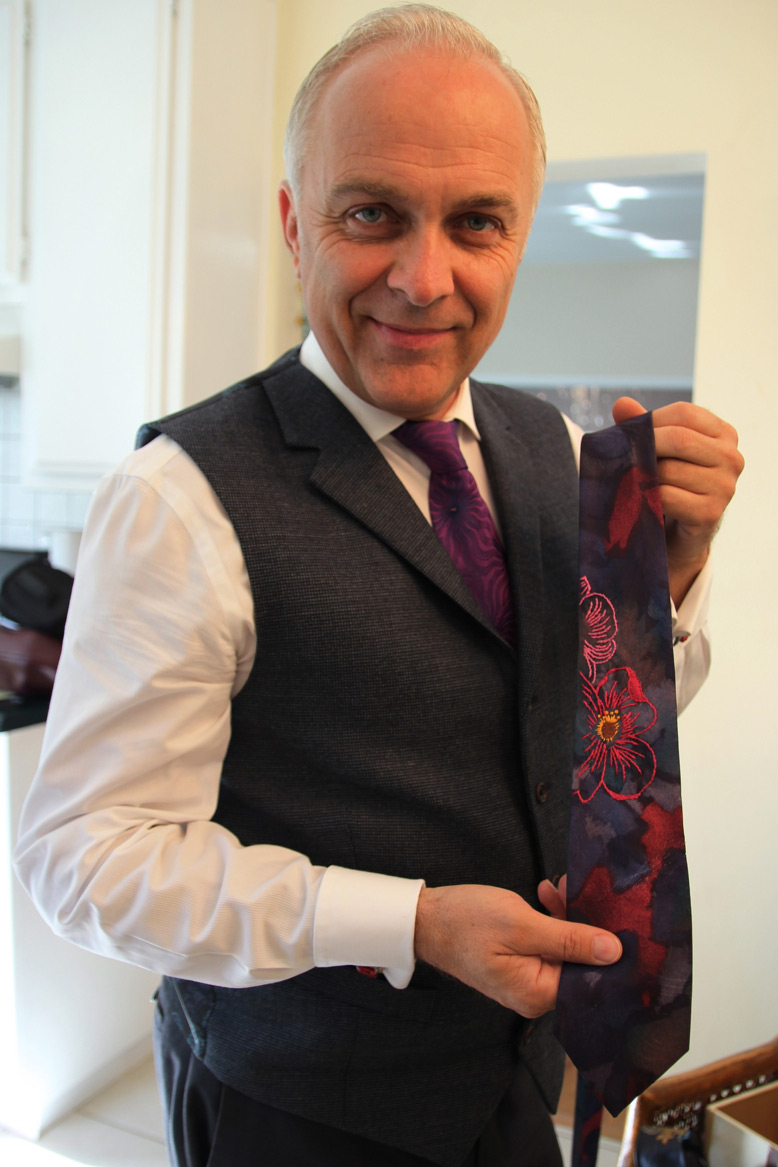 A long time Hughes shopper, Anthony Guthmiller, the Executive Director at AIDS Services Center in Pasadena, was excited to tell us about his new project repurposing vintage ties…it’s a new project, he’s only been doing it for a little while, he’s not sure what he’ll do with them, etc. But when we got to his house for the photo shoot, we were blown away by the incredible craftsmanship and exquisite designs of these vintage skinny ties and the copious output that Anthony’s produced over the past year. 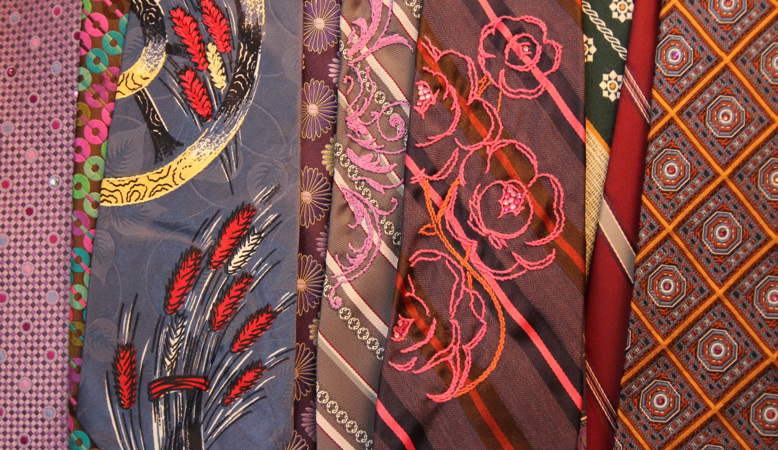 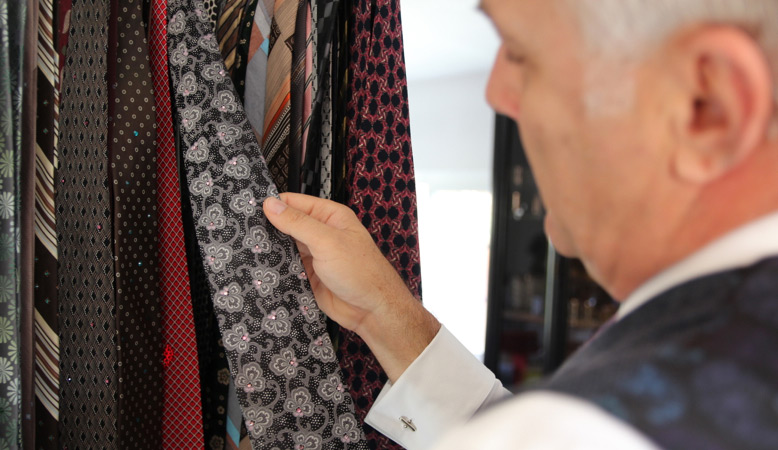 As evidenced by his high quality craftsmanship, Anthony is not new to handiwork. He started embroidering as a child and worked on traditional quilts and shams. After spending 12 years on a large quilt for his mother, he was eager to find a creative outlet that would offer more immediate results and something he could use everyday. He made his first vintage tie a year ago while staying in Palm Springs wondering how he could “pop up” his boring vintage skinny tie – and pop he did! 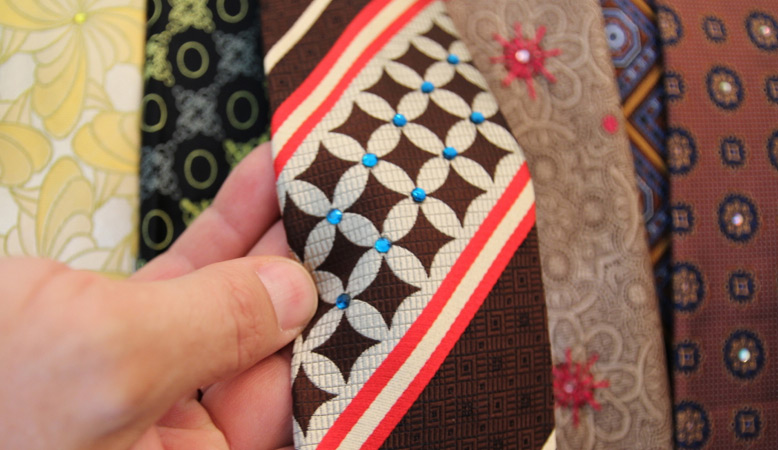 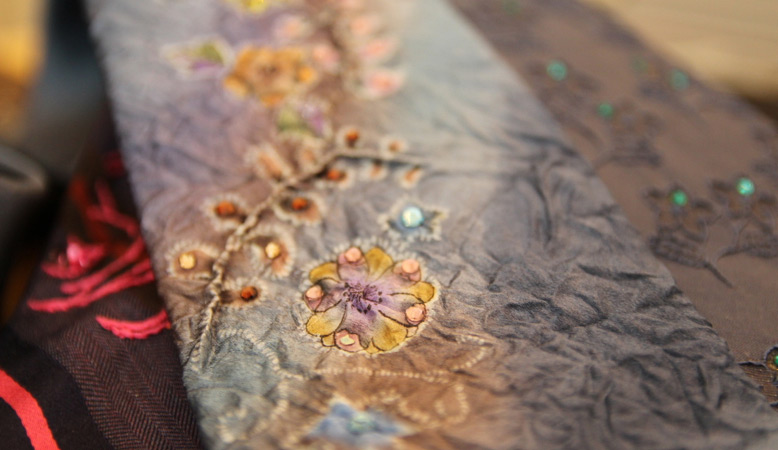 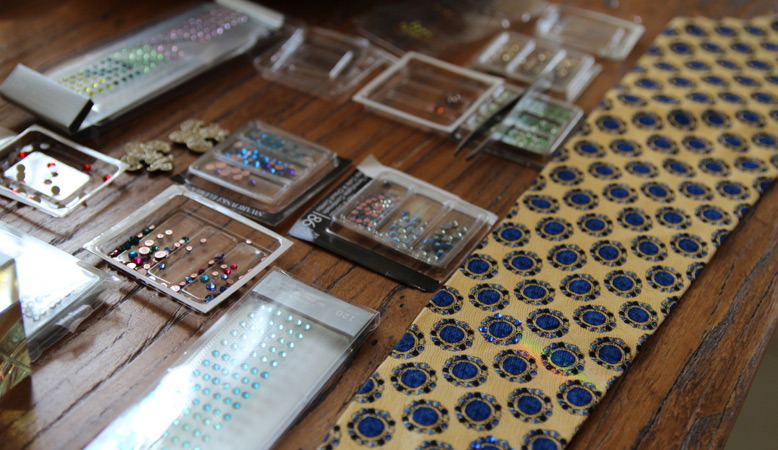 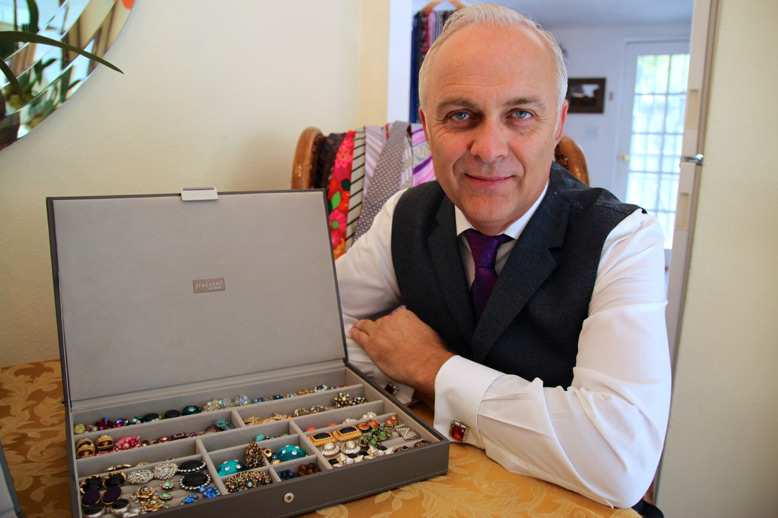 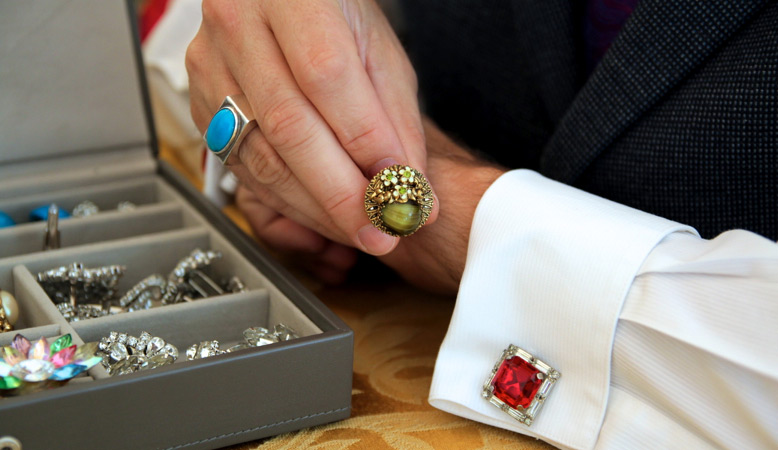 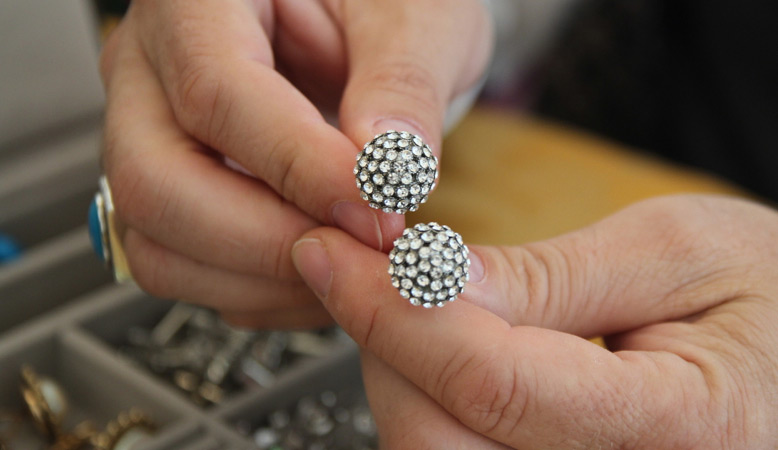 Since starting the vintage skinny ties a year ago, Anthony has completed 120 and has nearly 700 waiting in the wings. He hit a bonanza at the Hughes Mid-Century Masterpiece Estate Sale in October, when he bought over 80 designer vintage ties. He’s completed about 30 pairs of cufflinks and has just ordered 100 cufflink bases. He has plans to secure a high-end retail partner, Barney’s or Fred Segal, and to do trunk shows for friends and others dealers. 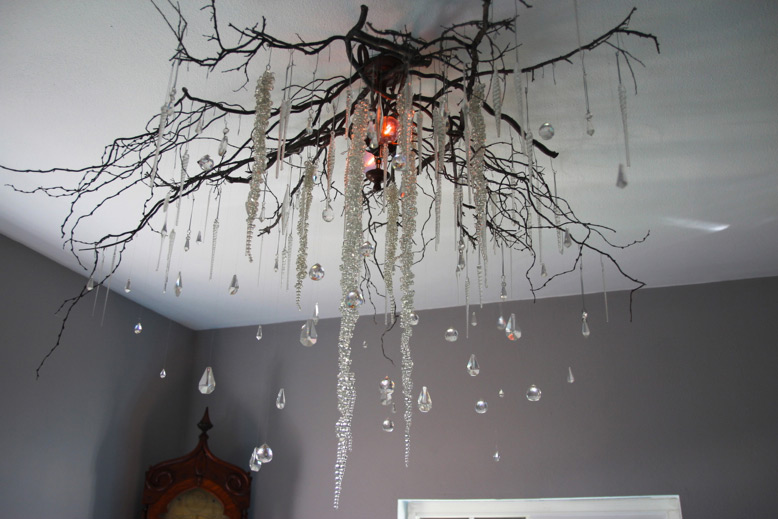 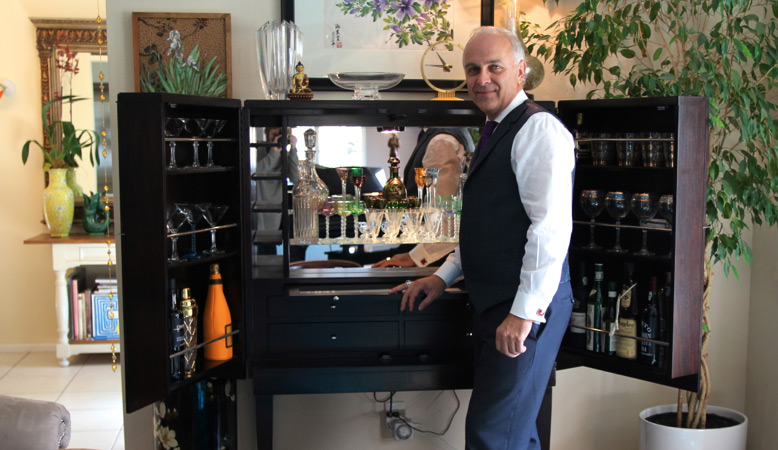 As Anthony showed us around his serene, stylish home, he pointed out many of his Hughes purchases destined to be holiday or host/hostess gifts – a glass vase, set of champagne flutes, cocktail shaker, a crystal bowl. Almost as an aside he mentioned that turning vintage teacups into candles makes a great gift – and he’s not talking about dropping a tea light candle into a cup – he actually melts beeswax and pours it into the teacup with a wick for a brilliant handcrafted gift! 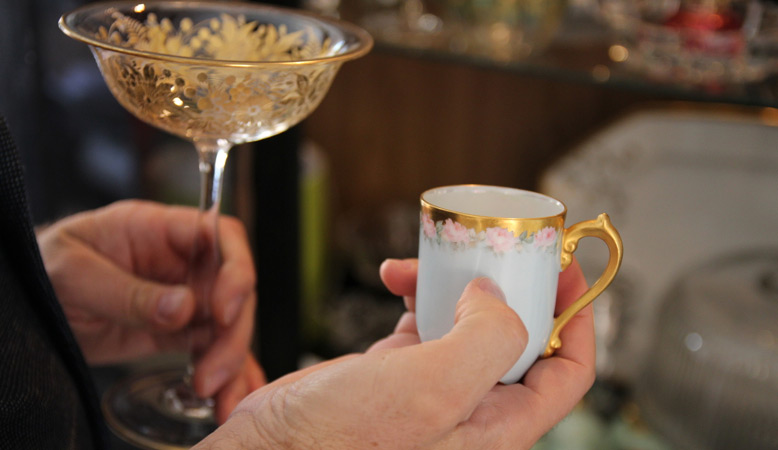 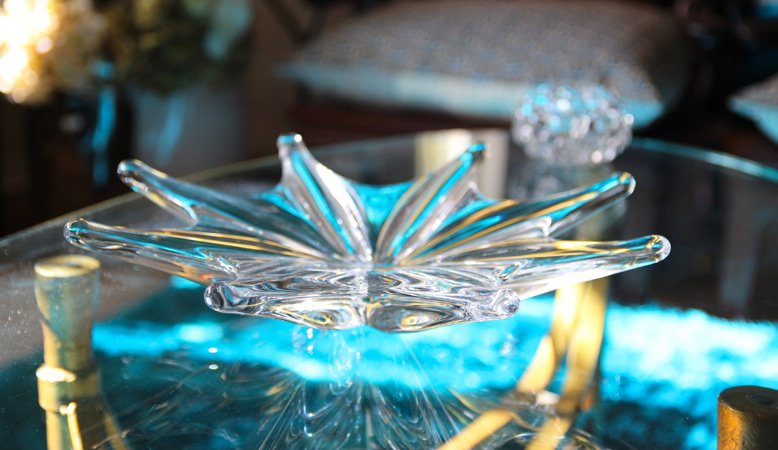 We truly appreciate Anthony generously letting us shoot his craftsmanship and stunning home, and hope that he will inspire you as well. In addition to vintage ties, many more pictures are posted on the Hughes Facebook page. 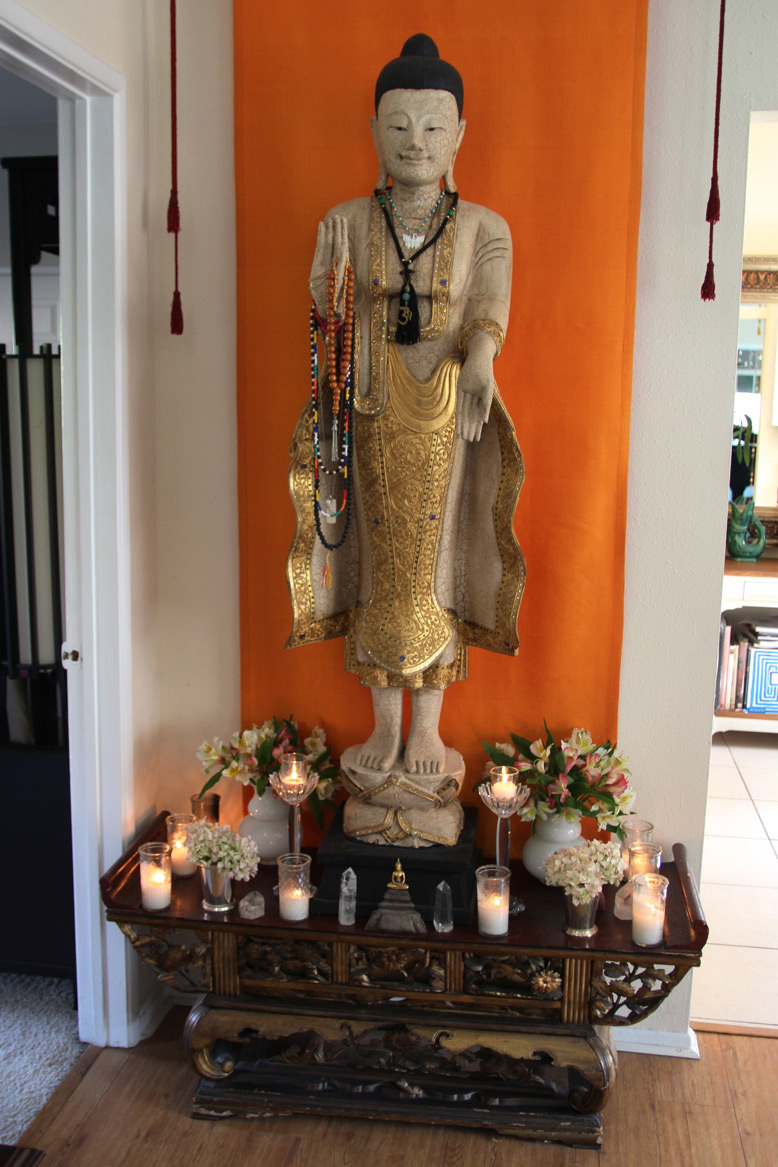